Any ideas on how to make this more permanent?

Hello everyone. For my current project I am using 2x 32x64 LED panels. Mounted on the back the panel is a Teensy 3.6, SmartLED Shield v4, and the Adafruit Bluetooth Low Energy chip. I made an Android app that controls various aspects of the LED and made a simple “game” from it that is basically an interactive animation that plays on the LED panel.

Anyways, this whole thing is powered by an Anker battery pack and needs to be portable. I have loose wires connecting the Bluetooth chip and the Teensy/SmartLED on a breadboard. Of note the jumper wires are going from the breadboard directly onto the SmartLED shield. Only the bluetooth board is using the breadboard. The SmartLED/Teensy is just using it as a place to sit.

So far the loose wires haven’t accidentally come out but I want something more permanent. Any ideas on how I can do this and keep the easy connectivity that the SmartLED shield provides? I’ve read about protoboards but I still can’t see how this would work in my setup. How would I attach the Teensy/Smart LED shield and the Bluetooth chip to the protoboard?

Attached is a picture of my setup.

I don’t have a good answer for your setup as mine is still using a protoboard and wires clipped into it (albeit fewer of them).
You could ask @Jason how he builds his boards like these: 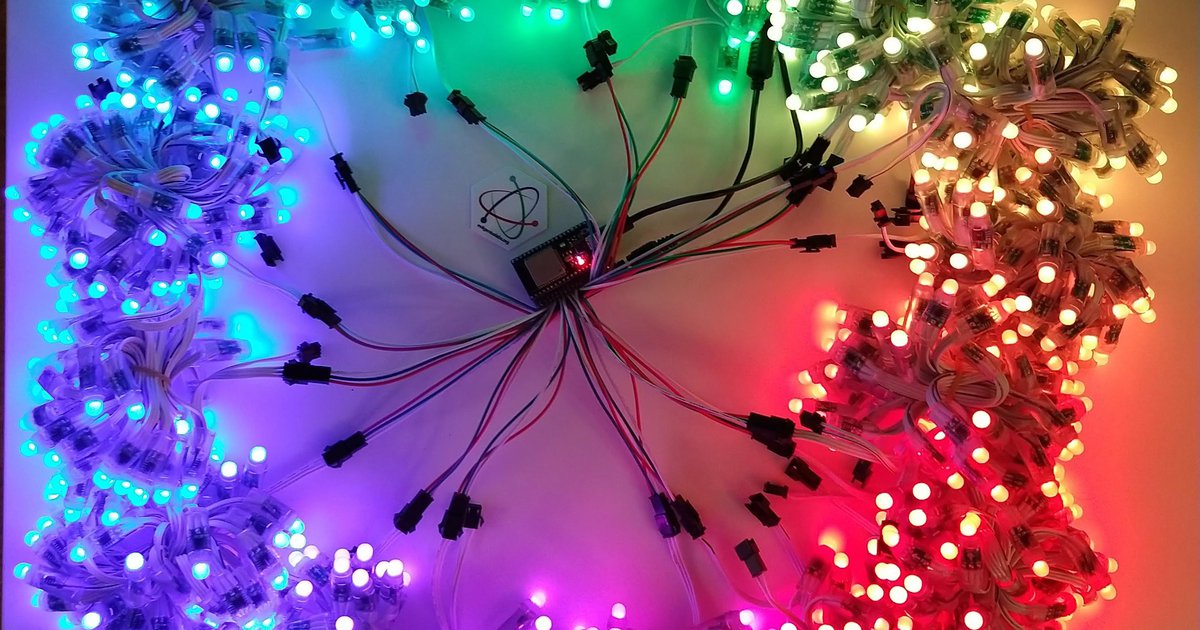 By the way, @Louis I was thinking that Jason may be able to modify that board layout a bit to make a SmartMatrix v5 ESP32?
We did discuss how ESP32 is a pain because there are so many and their pinouts are not compatible, but Jason just picked https://www.amazon.com/dp/B0718T232Z?tag=bizzi0d-20 which seems like a reasonable choice and ought to be around for a while.

@dennyhle will I be seeing your sign on top of a totem pole at some future EDC concert we might both attend?
You’ll find a few examples on this page, if one isn’t yours already:
http://marc.merlins.org/perso/clubbing/post_2018-05-18_Another-EDC-in-Las-Vegas.html (scroll to "the 2nd fanciest ones I found ")

@dennyhle in the meantime, look into this: https://www.adafruit.com/product/1609
you can solder onto that one for a permanent solution.

I think you’re going to need to solder and not just use jumper wires. You can solder wires to the pads on the top of the SmartLED Shield.

Wow…how did you know?! Yes it is a totem for EDC. I wrote an app that basically detects “dancing” and whenever the user dances there’s a Pikachu that dances as well. When the user stops dancing the Pikachu stops. I am not an artist at all so I had to get help from someone who does animation and honestly it turned out way better than I thought. Other concerns I had about was bluetooth connectivity during EDC because of how many people/interference may be around also was concerned the totem may be too heavy, a burden.

@dennyhle EDC was an educated guess since this is the only place I’ve seen totem poles with RGB Panels on top (burning man has lots of blinky but it’s not really a totem pole place, given that they’re a bit of a pain to get around with, a bit also why I made myself a shirt which I don’t have to carry, I can just wear it).
If you didn’t have a look at http://marc.merlins.org/perso/clubbing/post_2018-05-18_Another-EDC-in-Las-Vegas.html do have a look, you’ll find a few other totem poles with RGB Panels (although sadly they were very hard to photograph given the refresh rate problem and my often getting a partial frame that looked bad). You’ll also see what I look like for next time you go to a Trance/EDM event

Dreamstate Socal you say? Mmmh, I don’t remember seeing an RGB Panel Matrix there (just Neopixels), but I must have missed it. Either way, it wasn’t me since I don’t have a totem pole.
Totally off topic, but you can find some picts here: http://marc.merlins.org/perso/clubbing/post_2018-11-23_Dreamstate-Socal_-California_s-Manageable-EDC.html

If anyone is curious, this is what @dennyhle’s work looked at EDC. Very nice job and great animations:

It was nice running into you Marc. Here’s another video, more close-up.

Pikachu was raging hard during Captain Hook's set! Easily one of THE coolest totems I saw at EDC! Anyone know who made this?

Video didn’t load with the relevant timestamp on mobile, here’s another link: https://youtu.be/aUDLxvdtbOc?t=2189

Great work @dennyhle! Hope you had a good time at the festival too.

Any feedback or advice for others after taking your totem to the festival? Was the Bluetooth connectivity you were concerned about earlier an issue? Did you get tired of having to hold onto it?

Were the animations loaded as bitmaps and stored as part of the Teensy sketch?

Did you use an accelerometer to detect movement to control the animation?

So just as background…I had two types of animations, dancing and idle. During idle Pikachu would do stuff like hit a pokeball wave hello etc. I had an Android app that detected sustained movement above a certain threshhold and this would send a command to the Teensy to dance or stop dancing.

Bluetooth connectivity was not an issue. I don’t think I lost connection once and when I left the totem to go to the bathroom or something and came back it reconnected. When my Bluetooth was disconnected I had a “disconnected mode” where Pikachu would alternate between dancing and not dancing when I wasn’t around.

I still have to figure out why my Bluetooth didn’t AutoConnect with the latest Android OS. Direct Connect worked fine. Had to use an older version Android OS at the festival.

As for how I made my connections more permanent I actually had a PCB manufactured in China. It’s extremely cheap not expensive at all. I soldered very long pins on to the Teensy and some pins soldered onto the Bluetooth and soldered both of them to the PCB that made all the connections. I tried to learn how to use Eagle to do this myself but I was getting impatient and so hired a guy on Fiverr to do it and for a very reasonable price like $30. He finished it the same day.

Photo of the PCB

Cool, thanks for sharing the details. I used Eagle for the first time in college as it was required for an assignment, and it had such a steep learning curve and clunky (for a non CAD user) interface, I decided to skip the project as I didn’t think it was worth the pain. A few months later I actually needed it for a project I cared about and took the time to learn it, and now I’m kinda stuck as it’s too much effort to switch to something else (like KiCAD).

If I make any progress with the movement-reactive GIFs, I’ll post it to this forum for sure, and try to remember to post it here. Right now my thoughts are having a device in a pocket or with a strap to be held on the wrist/hand, with an accelerometer, small micro, RFM69 radio, and battery. The micro would convert movement from the accelerometer and determine the beat of the music, and then send that out as pulses to nearby displays, also with RFM69 radios. I’d use software beat detection from an audio input, but so far that seems like a difficult problem.

Anyway, right now it’s just a fun idea to think about while I’m working on an earlier phase of the project now. The festival I’m going to is in less than two months, and I don’t think I’m going to get that far with my first iteration. I’m working on a wearable, maybe with a panel, but definitely with LED strips.