I’ve wired up a Teensy v3.1 manually to an IDC cable and it worked perfectly for a while until earlier today. I don’t actually know what would’ve changed. I’ve redone the wiring and it’s still not working right.

I’ve two displays hooked up together.


[Album] Imgur: The magic of the Internet 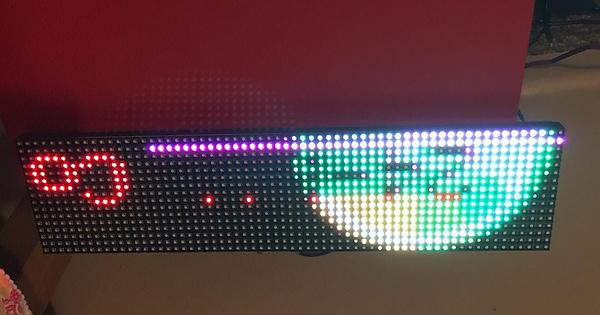 2nd image is when I set background to 255,0,0. A good portion of one of the panels just doesn’t have the red LED lit, seemingly.

3rd image is when I set background to 0,255,0. Note that there’s a line of pixels which are colored differently.

NOW THIS IS WHERE IT GETS INTERESTING:
Last image is 255,255,255. It looked perfectly white. So, the red pixel must be physically working, right?

Once more:
I don’t have a picture of this, but I set the panel to 0,255,255…and the section which the Red LED didn’t want to turn on is seemingly on, because that section looks perfectly white.

I’m not sure where to look next. Thoughts?

I do have a SmartMatrix shield, but that’s an entirely different ball of wax (I think I bricked my board earlier)

I can’t reverse the chain because I mounted them and don’t have the right size allen wrench with me at the moment.

More on this tomorrow.

My guess is one of your panels is damaged. I don’t know what might have caused the damage. The panel isn’t drawing properly at 16 pixels from the edge, which is a likely transition point between two driver chips on the panel.